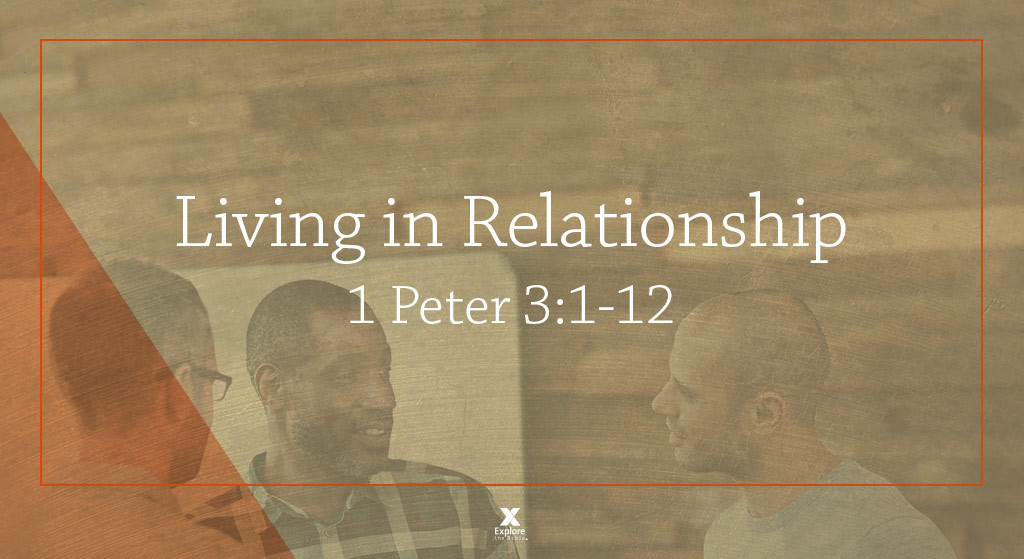 God made us to live in relationships by creating us in His image. Remember the conversation in Genesis 1:26? “Then God said, ‘Let us make man in our image, according to our likeness.” Who was the us? Admittedly, various suggestions have been made. But I think the strongest view is that this was a conversation among the Trinity—the Heavenly Father, Christ the Son of God, and the Holy Spirit—three Persons, one true and living God existing in a relationship of perfect unity. This view makes even more sense when it is laid alongside Jesus’ prayer for believers on the night before His crucifixion. As part of that prayer, Jesus urged: “May they all be one, as You, Father, are in Me and I am in You. May they also be one in Us, so the world may believe You sent Me” (John 17:21).

Simon Peter may well have overheard Jesus pray those words. I say that because one of Peter’s key themes in the Epistle of 1 Peter is how believers are to be Christlike in all their relationships. In 1 Peter 3:1-12, Peter focused on two relationships in which believers especially needed to shine like stars in the midst of a warped and wicked world. They could do so by living in unity, displaying respect for one another, and seeking above all to honor Christ in their behavior.

Marriage relationships—Marriage is the oldest human social institution on the planet. It’s been around since the garden of Eden. It has also been under attack from the beginning. When the first human couple sinned, their marriage relationship was one of the first casualties. Mutual trust was crippled. In shame, the first husband and wife hid themselves from God and from each other. To this day, broken human cultures have tried to escape the sacredness of marriage by disdaining, devaluing, and redefining it.

What are some ways that cultural attitudes about marriage have changed in your lifetime? Why

Peter reminded us that the Christian message about marriage places this foundational sacred-social relationship on Jesus Christ. To get marriage truly right, spouses must trust in the One whose relationship with the church, His bride, is likened to the marriage relationship (Eph. 5:22-33). Because of their love for the Savior, Christian wives respect and submit to the spiritual leadership of their Christian husbands. They adorn themselves as beautifully on the inside as on the outside. In turn, Christian husbands lay down their lives—figuratively and, if need be, literally—to protect and provide for their “coheirs of the grace of life” (1 Pet. 3:7).

Church relationships—In 1 Peter 3:8-12, Peter focused on a second crucial relationship for believers: relationships with others, especially with other believers in the church. The key to moving from good to great relationships with other believers is for the Christian to take the initiative in acting Christlike. This is especially important in situations where our selfish sinful nature wants to rear its ugly head again. By following the lead of the Holy Spirit living in us, Christians are to act in unity when we’re tempted to divide. We are to take the initiative to love other believers even when they don’t act so lovable. We are to step out first to be sympathetic, compassionate, and humble even when we feel it’s our time to be served or to get our way. We are to shock the cultural system by responding to evil with good and to insults with words of kindness and blessing.